Newsletter June 2018
As the academic year has progressed, so has the Blurred Lives project right across Europe. This innovative project is beginning to gain significant traction with schools and other educational researchers within the field of cyberbullying.

In recent months, ethical approval has been granted for all institutions to carry out our scoping survey with young people in schools. The team have been visiting lots of urban post-primary schools across Europe, gathering data on the experiences of young people on the internet. Many of the young people surveyed were excited to be involved in such a large research project and are eager to be involved in the next stage of the project.

The project team also held their second transnational planning meeting in Bologna on 21st June 2018. At this meeting, initial survey findings were discussed as well as plans for the next stage of the project. During this second stage, the team hope to build upon current relationships with schools to carry out a number of focus groups and collaborative resource sessions using the quality circle approach.

The team have chosen this approach as they hope to provide a particularly co-participatory experience for the young people involved. The team hope to produce resources in conjunction with the young people for pupils, parents, teachers and social networking providers to tackle cyberbullying and ultimately equip young people with appropriate tools to stay safe while online.

During the meeting in Bologna, the team invited Dr Barbara Spears, Associate Professor, University of South Australia to advise on our approach to co-participation, based on her many years of research experience in this area. Her advice and practical suggestions were very much appreciated. She is pictured below with the rest of the team at the recent meeting in Bologna.

Principal Investigator, Dr Noel Purdy, comments on progress to date: “This was a very useful meeting as we approach the half-way stage in the project. Our survey results are beginning to come in from schools across Europe and we are excited about the plans to work alongside young people in developing resources in the autumn term. It has been so encouraging to hear how enthusiastic schools have been to get involved with our project”.

As the project moves forward, the team continue to prepare for the next stage of the project whilst collecting data in the remaining schools in the new academic year.

Our official website is now live and can be found at https://www.ou.nl/web/blurred-lives/project. On this website, information will be available for participants along with resources for teachers, pupils and parents once they have been created and finalised. For frequent updates, please visit and follow our Twitter feed @BlurredLives.

For more information about the Blurred Lives Project, please contact: 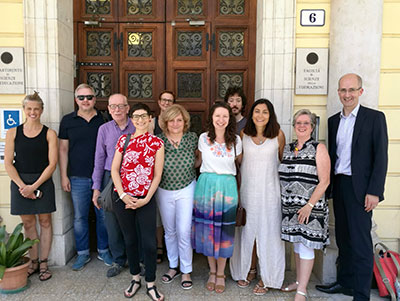