More than 2.500 participants for the Spanish-speaking MOOC on Marine Litter 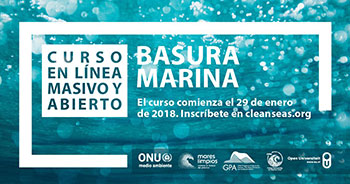 More than 2.500 people worldwide registered for the Spanish-speaking Massive Open Online Course (MOOC) on Marine Litter of the Open University. The Course launched on 29 January 2018.

The global pollution of seas and oceans by waste is a growing problem that requires a global approach. It is identified by the United Nations as one of the most important environmental problems of the 21st century. The plastic waste that ends up in the environment carries great risks. For example, it is harmful to organisms living in the sea, and there is increasing evidence that (micro-)plastics can enter our food chain through accumulation.

In recent years, UN Environment has been working on a global network for the prevention and management of marine waste. This led to the creation of the Global Partnership on Marine Litter, in which the UN Environment and OU jointly developed an English-speaking MOOC Marine Litter in 2015.

The MOOC provides insight into the latest developments and provides guidance on how to map out and tackle the problem in the students own (working) environment.

After two successful runs with more than 9,000 participants, it was decided to offer the MOOC in Spanish as well.

Ansje Löhr, project leader: "We realized that more than 1 billion people are proficient in English. And that almost 500 million can speak Spanish. World citizens, who mostly live in countries with an immense coastline. Think not only of Spain and parts of the United States, but also Central America and the western part of South America."

Research on the impact of the MOOC

Researchers from the Science department of the Faculty of Management, Science & Technology have been involved for several years in research into the causes and effects of and solutions for plastic pollution, among others within the project Schone Maas Limburg and with research partners in Indonesia.

Ansje Löhr, project leader: "Of course as researchers, we are interested in how our education has been translated into specific social actions. In the summer of 2018, we expect to be able to report the lasting impact of the MOOC on local initiatives to combat this immense environmental problem."